Following the premiere of the first episode his four-part video presentation, Take Control Live: Working With Your iPad, Joe Kissell packed up the remaining assets of the Take Control media complex in Paris, France, in preparation for his move to Southern California later this month. Show #1 of the series, “The Three R’s,” which was webcast on Thursday, 6 December, 2012, was produced under unusually difficult conditions, with the bulk of the media complex already on a ship steaming toward the Western Hemisphere. Nonetheless, viewers were treated to a deep yet fast-paced exploration of the ways that an iPad can be used for producing and editing text, crunching numbers, and giving presentations. When asked why he was relocating, Joe responded (entirely in this reporter’s mind), “The bread and pastries in Paris are fantastic, but have you ever tried to find a good chile relleno here?” 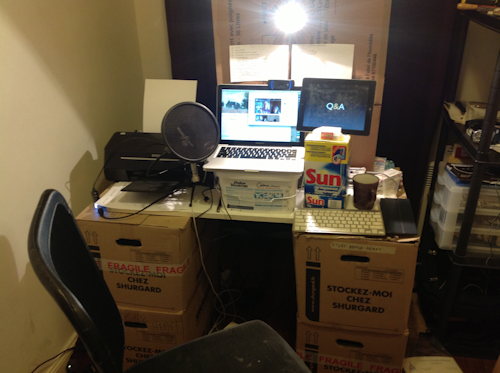